Did you know you can send a letter within the United States for 2 cents in 2020? I recently learned how someone received and mailed a letter for only 2 cents postage. Curious, I mailed four letters to friends that arrived without extra postage due, so here's my attempt at explaining how and why. Lastly, I share a negative remark I received from someone defending the "struggling" Post Office, and why that isn't exactly true. 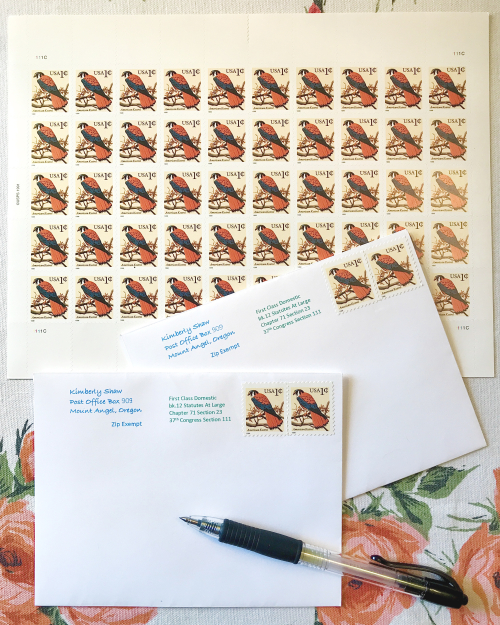 This is only valid for personal letters written and sent to friends and family within the United States that weigh under 1/2 ounce. Each additional 1/2 ounce is an additional 2 cents.

This is NOT for commercial use or important documents. Don't use to send checks or sensitive papers. You also can't use to mail to any federal government agencies such as the social security office, military bases, prisons, police stations, or Washington DC, etc. This is NOT available for foreign mail.

In a nutshell, I'll tell you how to address your envelope, then explain why it works.

When addressing your letter and writing your return address, spell out every word. Spell out "Street," "Avenue," "Boulevard." etc. If it's part of the address, spell out "North," or "South, etc. Spell out the State: "Nebraska," "California," "Mississippi," etc. DO NOT use any abbreviations, none! I'll explain why below. On my envelopes, I spelled out "Post Office Box," "Apartment," and "Northeast" (instead of NE). Next, DO NOT include the zip code, instead write "Zip Exempt."

CORRECTION: The top of your envelope should include notations at the top of the envelope next to the stamp as shown in the photos below, EXCEPT it should say "Non Domestic". Though both of my letters went through as shown, the complete text of the law you are using actually reads:

Finally, add 2 cent postage. It can be one 2 cent stamp; I just happen to have 1 cent bird stamps. I also started pre-printing my return address and the law code, but it can be hand-written. 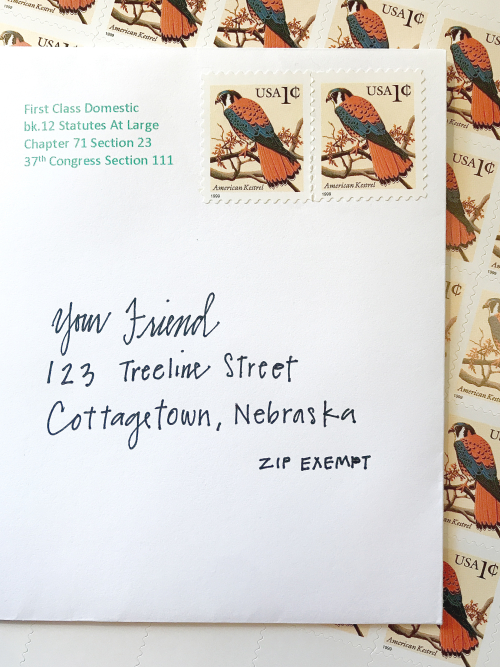 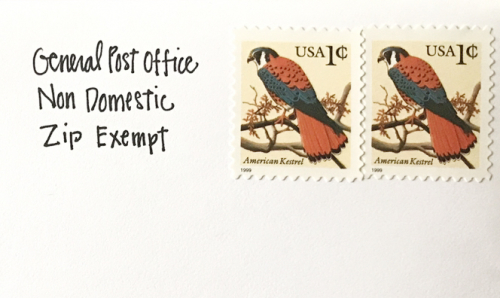 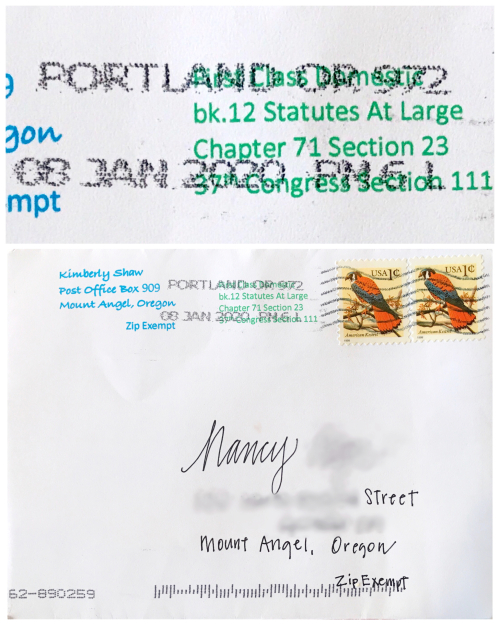 How is this possible? When you mail a letter this way you are sending mail using the General Post Office that still exists within the USPS corporation/agency. Here's a screenshot of that law below. Notice Sec. 23. When your letter is delivered to the post office or mail carrier with a stamp affixed to the envelope the cost is 2 cents. 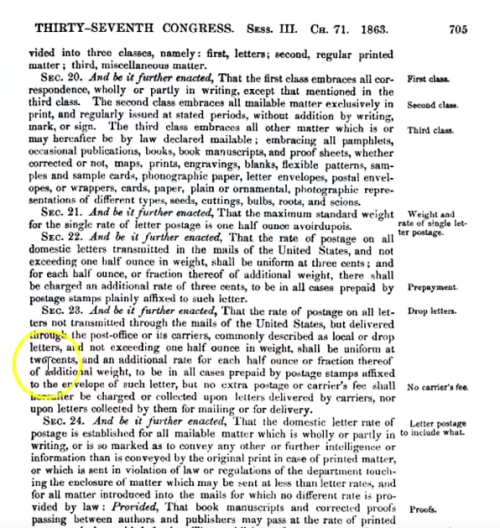 Here's some USPS history. The current USPS corporation/agency was created in 1970 when Nixon enacted the Postal Reorganization Act of 1970, passed by the United States Congress to abolish the then United States Post Office Department, which was a part of the Cabinet, and created the United States Postal Service, a corporation-like independent agency with a monopoly on the delivery of mail in the United States. You can find all the info about it with a quick online search. However, the old law still exists. It can't be rescinded, repealed or amended.

Is the USPS struggling? I don't think so. I totally agree that the current 55 cent postage to send a letter is not going to break the bank, and I will still send cards using the current USPS rate. But before you accuse anyone of "nickel and diming the failing Post Office to death," yes that's what I was accused of by someone who failed to know how much the USPS makes from my little card business each year. The USPS is a money-making corporation whose heads (possibly the government itself) are the cause of their own money pitfalls, not FedEx or even Amazon. You can look up the accusing article by searching: Business Insider, The US Postal Service's volumes tanked for the first time in nearly a decade - here's why insiders say FedEx and Amazon are to blame, Aug 15, 2019. It's a jarring headline of an article that describes the USPS as "troubled" and "crumbling" while stating it "hemorrhaged some $69 billion from 2007 to 2018." That's over $6 billion each year! If it's a hemorrhage, it's my opinion that the amount is over their normal revenue, right? But the problem with their decline in revenue isn't due to competition. The USPS was forced to pre-pay pension plans for the next 75 years. Wouldn't that be for employees who aren't even born yet? The article also states that while the USPS moved 47 million fewer packages in the second quarter of 2019 than in the previous year (a decline of 3.2%) its revenue increased by 4.8%. If I'm reading that right, the USPS worked less and made more. There's more info about the history of the US Post Office and how much they make if interested, or you're a student doing a school paper at https://www.britannica.com/topic/postal-system/Nat...

I'll get off my soapbox now. I hope I relieved any guilt about hurting the USPS. Just remember they issued Forever Stamps. Anyone else still using 48 cents Forever Stamps on envelopes today? Does USPS ask for extra postage? NOPE!

If you decide to send someone your 2 Cents in the form of an addressed envelope may they, also, enjoy this little tidbit of hidden trivia.

And finally, please note, I am not a legal advisor of the law. This is a result of my findings, research, and curiosity. I'm not offering legal advice. If you verify this information yourself, you will come to the same conclusion. Cheers!