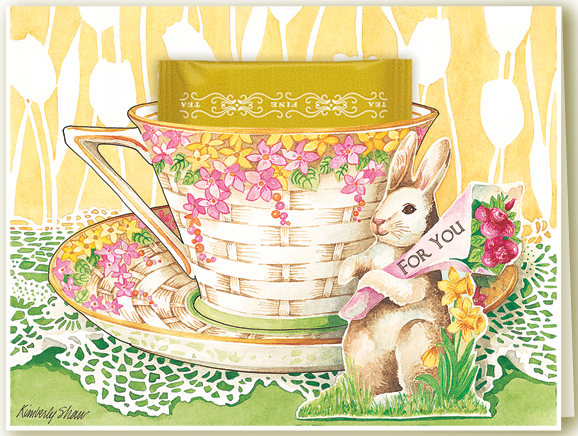 One afternoon, I found my friend in an antique store. She was there looking for a pretty birthday gift for her mother-in-law. I was looking for inspiration for a new spring teacup card. We meandered together through the shop. This beautiful basket teacup caught my eye. I held it up to my friend and proclaimed, “This is it!” I meant it would be perfect for a new spring card. She responded, “Yes it’s perfect! My mother-in-law will love it!” The look on my face must have revealed my true thoughts, because she then asked, “Did you want that teacup?”

It appropriately became a “FOR YOU” card. The teacup was for the mother-in-law, the card was created for you to share with another who will discover it's for them. The inside reads, "Because you mean so much to me." It comes with a delightful Egyptian Chamomile tea, because we all know bunnies love chamomile.